Please note: This kit can be used instead of discontinued #53000-NB

Norgen's Total RNA Purification Kit provides a rapid method for the isolation and purification of total RNA from cultured animal cells, small tissue samples, blood, serum/plasma, bacteria, yeast and fungi. The kit purifies all sizes of RNA, from large mRNA and ribosomal RNA down to microRNA (miRNA) and small interfering RNA (siRNA). The RNA is preferentially purified from other cellular components such as proteins, without the use of phenol or chloroform. The purified RNA is of the highest integrity, and can be used in a number of downstream applications including real time PCR, reverse transcription PCR, Northern blotting, RNase protection and primer extension, and expression array assays.

The process involves first lysing the cells or tissue of interest with the provided Lysis Solution. Binding solution and ethanol are then added to the lysate, and the solution is loaded onto a spin-column. Norgen's resin binds RNA in a manner that depends on ionic concentrations. Thus only the RNA will bind to the column, while the contaminating proteins and genomic DNA will be removed in the flowthrough or retained on the top of the resin. The bound RNA is then washed twice with the provided wash buffer in order to remove any remaining impurities, and the purified total RNA is eluted with the elution buffer. The purified RNA is of the highest integrity, and the complete profile of RNA species is represented.

(A) Equal portions of the isolated RNA were resolved on an 8% Urea-PAGE gel.

(B) The relative expression of miR-21, miR-19, and S15 rRNA was determined by qRT-PCR, the resulting threshold cycle (Ct) values are shown. 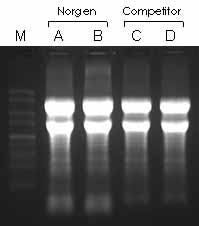 Unlike most competitor's kits (lanes C and D), Norgen's Total RNA Purification Kit (lane A and B) allows for the isolation of all sizes of RNA, from the very large RNA down to the microRNA. Lane M is Norgen's RNA Ladder. Total RNA, large and small RNA species, can be seen in lanes A and B (Norgen). 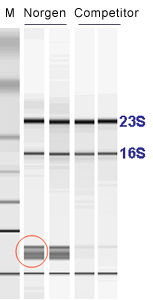 Total E. coli RNA analyzed on the Agilent® 2100 BioAnalyzer. Note the presence of small RNA species (red circle) in the samples isolated via Norgen's kit and the absence of these RNA sp. in the comptitor RNA preparation. 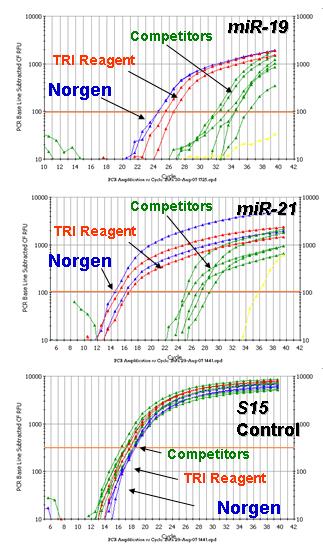 Amplification of Both Large and Small RNAs in the same Extraction: Norgen’s Total RNA Purification Kit isolates the complete size range of RNA, including small RNAs without the use of phenol. Total RNA was isolated from 0.75 million HeLa cells using Norgen’s Total RNA Purification Kit, various silica-based competitors and phenol-based TRI Reagent. RT-PCR was performed according to Shi and Chiang (2005). Fifteen microliters of the 50 µL isolated RNA were polyadenylated in a 50 µL Poly-(A)-Polymerase reaction. Four microliters of the polyadenylated RNA were used in a 20 µL reverse transcription reaction with a poly T adaptor primer. One microliter of the reverse transcription was used in a 20 µL qPCR reaction with primers against the human microRNAs (miR-19 and miR-21) and large mRNA (S15). Only the use of Norgen's Total RNA Purification Kit resulted in detection of both micrRNAs and mRNA amplification products similar to TRI Reagent but without the use of phenol.

High Quality of RNA from a Diverse Range of Inputs, even from Plasma 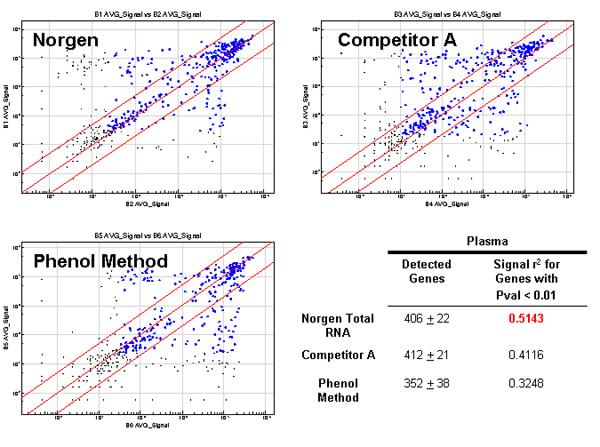 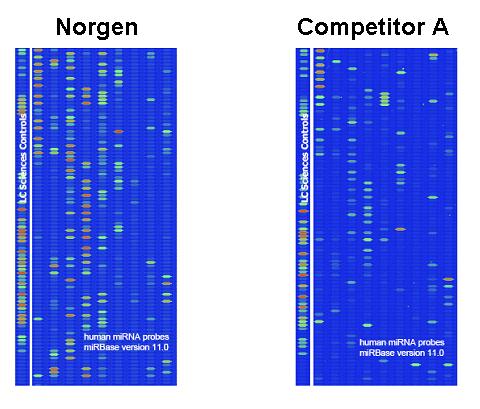 Norgen’s Total RNA Purification Kit allows sensitive RNA extraction from as little as a single cell. Total RNA was extracted from a decreasing number of 293 HEK cells from 1 million cells down to a single cell. Five microliters of the 50 uL isolated RNA was then subjected to a 20 uL reverse transcription using oligo dT primer. Three microliter of the reverse transcription was used in a 20 uL PCR reaction with primers to detect the human beta-actin transcripts. PCR products of beta-actin were detected from as little as a single cell. M is the marker lane, while the numbers correspond to the number of 293 HEK cells that were used for the RNA isolation procedure. Please view Application Note (see link below).