SimpliFi HS Mix is a combination of the latest advances in buffer chemistry and PCR enhancers and stabilizers, together with an aptamer-mediated hot-start polymerase, dNTPs and MgCl2. It has been designed for highly reproducible, accurate assay results in the presence of inhibitors. The advanced buffer chemistry and enhancers has been developed for fast PCR and is designed for superior sensitivity and specificity, making SimpliFi HS Mix perfect for NGS library amplification.

SimpliFi HS Mix is supplied as an optimized 2x master mix that only requires the addition of template and primers, thereby reducing the number of pipetting steps during PCR set-up, for improved speed, throughput, sensitivity and reproducibility.
The optimized mix also makes SimpliFi HS Mix useful for crude samples such as 2% whole blood.

High sensitivity and yield. SimpliFi HS Mix was compared with high-fidelity mixes from other suppliers for the amplification of a 1.2 kb fragment of the F8 (Coagulation Factor VIII) gene. A five-fold serial dilution of human genomic DNA was used as a template and all reactions were set up according to the manufacturers’ recommendations. Marker is HyperLadder™ 50 bp, (BIO-33054-BL). SimpliFi HS Mix delivers higher yield and sensitivity as compared with the competing products.

Optimizing the buffer and using an aptamer hot-start has also made SimpliFi HS Mix ideal for amplifying multiplex targets, so that it can be used for high-throughput applications with limited starting material, such as genotyping and forensic analysis. 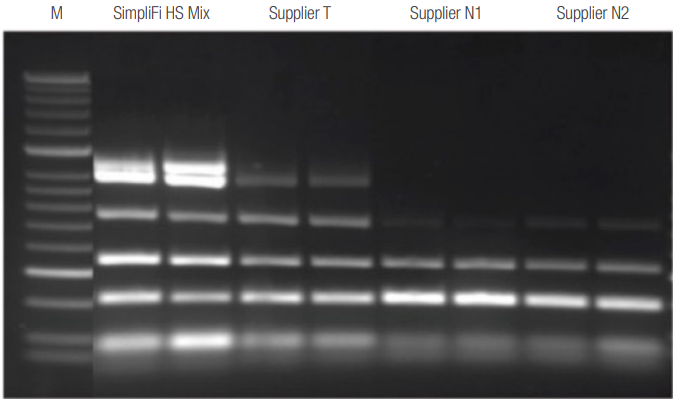 Multiplexing with inhibitor-rich samples. Multiplexed PCR amplification was performed using 6 targets (961 bp, 892 bp, 793 bp, 548 bp, 332 bp and 196 bp) directly from 20% whole blood in EDTA, set up according to the manufacturers’ recommended protocols. Marker is HyperLadder 50 bp, (BIO-33054-BL). SimpliFi HS Mix is able to outperform other suppliers in the presence of 20% whole blood in EDTA in a multiplexed PCR reaction.