99.7% Genomic Coverage! “If variants are there, you will see them”

The SNAP SARS-CoV-2 Kit uses overlapping primers to generate 345 amplicons, sized 116-255 bp (average 150 bp), along the length of the 29.9 kb viral genome and obtain 99.7% coverage of the genome. Overlapping primers ensure that novel variants are detected, even when the mutation is a dropout of genomic sequence. Comprehensive mutation detection is crucial for tracking nucleotide variants and improve understanding of virus evolution, transmission, and pathogenesis.

Figure 1. Contiguous coverage of the SARS-CoV-2 genome from position 25 to 29853. 100,000 copies of gamma-irradiated SARS-CoV-2 (BEI, NR-52287) that were originally isolated from an oropharyngeal swab were converted into an NGS library with the Swift SNAP SARS-CoV-2 kit and sequenced 2 x 150 bp on an Illumina® MiniSeq® System. Resulting reads were downsampled to 280k reads per sample for analysis.

Figure 2. Obtain genomes from as few as 10-100 viral copies. SARS-CoV-2 synthetic template material (Twist Bioscience Cat. No. 102024) was mixed with UHR RNA (Agilent 740000) and converted into first-strand cDNA using the Superscript® IV First-Strand Synthesis System (Thermo Fisher 18091050). cDNA was converted into an NGS library with the Swift SNAP SARS-CoV-2 Kit and sequenced on the Illumina® MiniSeq® System at 2 x 150 bp. Resulting data was downsampled to 280k reads per sample. 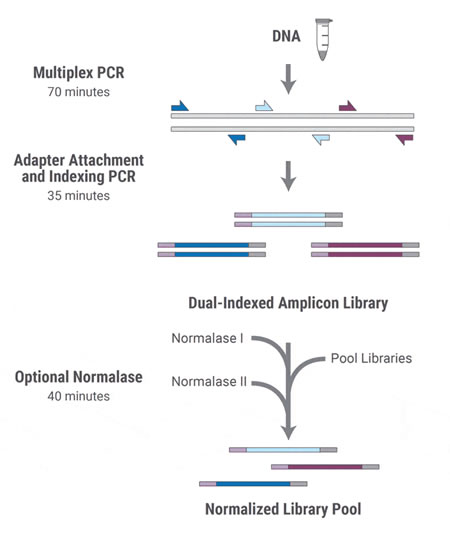 For Swift Normalase Amplicon Panel (SNAP) based NGS Target Enrichment Workflow please be sure to select one from each of the three categories to complete your order:

All components have to be purchased individually.